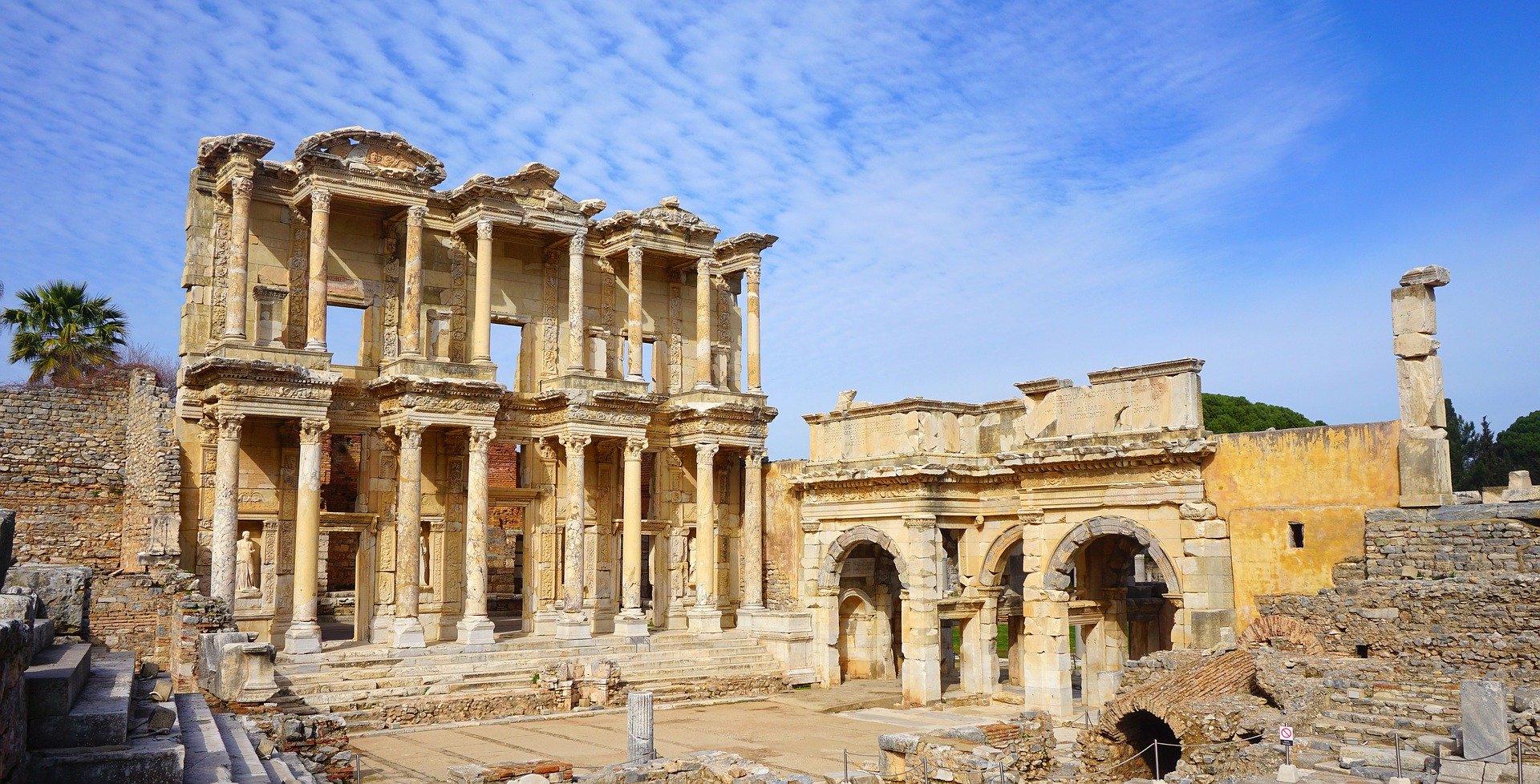 Ephesus was one of the most important centers of the ancient World in terms of civilization, science, culture and art in its history dating back to 4000 BC. Ephesus was an important harbor city of its time. Ionians had settled in Ephesus due to Dorian invasion and then developed their city during the rule of Lydians. The traces of Ionian, Roman, Byzantine, Seljuk and Ottoman civilizations have existed until today. Even though there are ruins from Greek, Roman and Byzantine periods, most of the ruins are from the Roman period. The first foundation of Ephesus City goes back to the Neolithic Age 6000 BC. The ruins are spread out on a large area since the city moved many times through out its history. The population of Ephesus was 20.000 when it used to be the greatest harbor city. In addition to being the greatest commercial center of the ancient times, it hosted the Temple of the Artemis culture based on Kybele, the old main goddess of Anatolia. This temple is regarded as one of the Seven Wonders of the World. Among the remains are a theater, a gymnasium, baths and a library. Each year, some 1.5 million people visit Ephesus, the important city of ancient times. There are 50.000 pieces in the collection of the Archaeological Museum of Ephesus. This figure increases every year with the new findings from the excavations.

Celsus Library, Celsus Polemaeanus was the Roman governor of Asia Minor early in th 2nd century AD. According to an inscription in Latin and Greek on the side of the front staircase, his son, Consul Tiberius Julius Aquila, erected this library in his father’s honour after the governor’s death in 114. Celsus was buried under the western side of the library. The library held 12.000 scrolls in niches around its walls, making it the third-largest library in the ancient world after Alexandria and Pergamum.

Temple of Artemis, at the western end of Selçuk, was in its day the largest in the World, eclipsing even the Parthenon at Athens, and thus earning a spot on the list of the Seven Wonders of the Ancient World. Only one of its original 127 columns remains, often as not topped by a stork’s nest; a poignant testament to the transitory nature of human achievement. Still  it is a lovely tranquil place, the enormous pillar giving you some indication of the vast size of temple.

The Virgin Mary Church is close to the peak of Bülbül Mountain, one of the hills overlooking Selçuk. After the death of Jesus Christ, Virgin Mary had gone to Ephesus with Saint John and lived here since then on until her death at the age of 101.Thus this church is an important pilgrimage center for Christians. There is also a spring believed to be healing. The Popes Paul VI and Jean Paul II visited this house. The House of Virgin Mary is declared to be sacred and an important pilgrimage spot visited by Christians from all over the world.

Şirince , the village is 12 km away from Ephesus and famous for its old houses, wine vineyards and peach orchards. It was founded in the 5th century AD. The architectual structure of the village is different from the others. All of the houses are built of stone and brick. There are several windows. The balconies are suspended. The basement is used as kitchen and pantry. The window borders and eaves of the houses are decorated with pictures and bird patterns. There are two churches, a primary school that has been restorated today and monasteries around. Thousands of travellers visit and take photos of the village ; they taste the special pastry made on sheet iron and homemade wines. The homemade apple, cherry, peach and strawberry wines are well known with their special tastes.