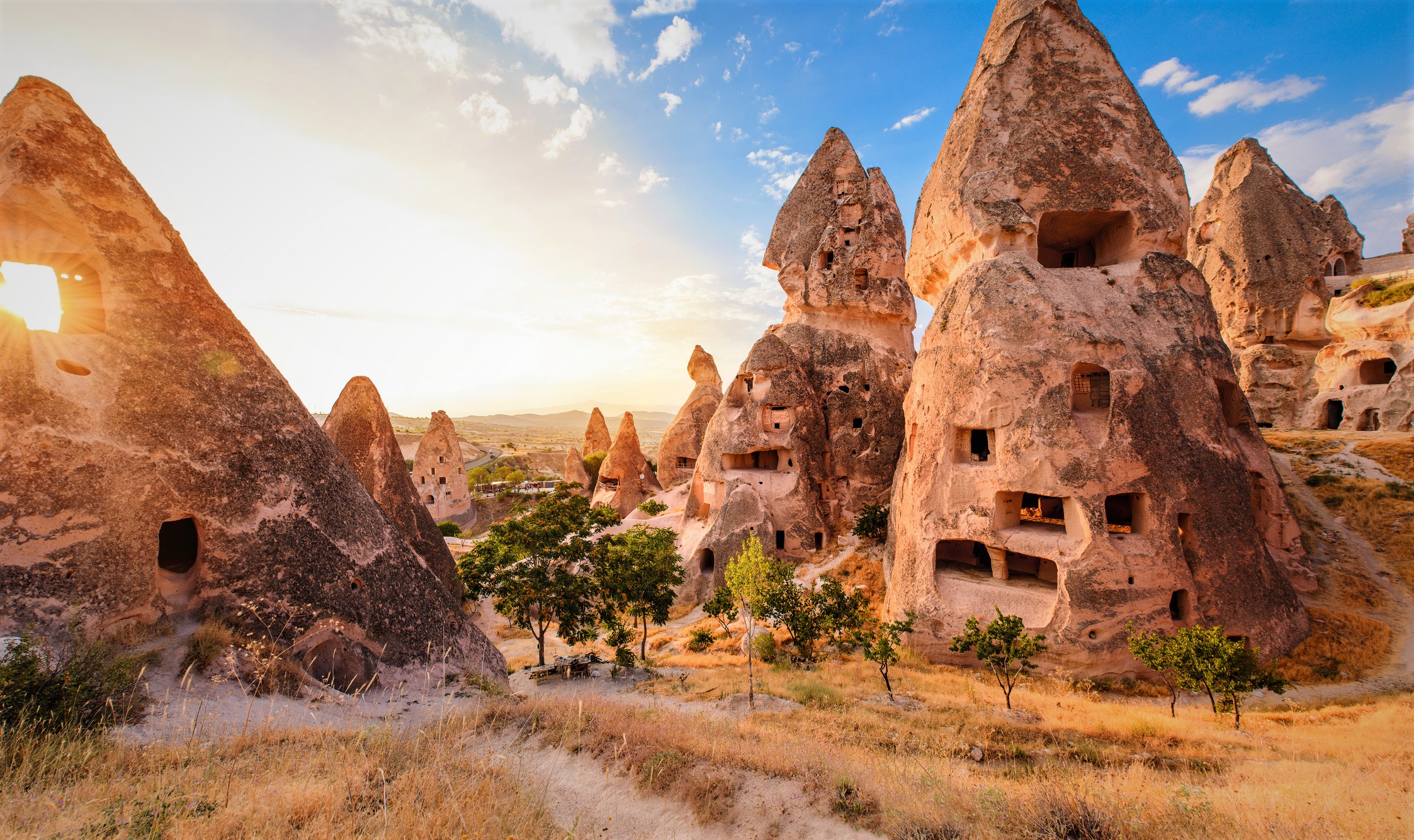 Cappadocia has beauties by the reasons of three volcanic mountains were called Hasan Mountain,
Erciyes Mountain and Melendiz Moutain. Lava that spurted out from these mountains and other
things that spurted out from them accumulated in the region for a very long time. People later
discovered that among the solid things which volcanoes spurted out ashes have different
importance. Because ashes were covering over very large area by the effect of wind and forming
deep layer by coming together. This layer, which later becomes hard and turns to a stone can be
easily work up by hand. People gave the name of tufa to these stones. Today the layer of tufa, which
is in the region of Cappadocia changes according to regions and reached up to 100 m of thickness.
Whether in the world or in our country there are many volcanoes’ preparedness of thick tufa layer’s
accumulation in the region by spurting out lava at the same time. If the layer of tufa was thin in the
course of time it would disappear by the effect of erosion and there will be not any beauty. Soil
which dragged on by corrosion and hard blocks which could resist against this corrosion brought
forward interesting views and formations. These interesting formations could nor be interpreted by
the people who lived here later and it is decided that sprites could do them. Because of this even
today formations are called ‘fairy chimneys’.

Cappadocia being an attractive destination by the carved churches and underground cities of the
first Christians becomes prominent as a belief and cultural tourism center. After 7th century
Christians especially those live in Kayseri, had forced to move to Goreme for seeking shelters to hide
themselves. It s known that during this period more than 400 churches were constructed in Goreme
and around.
Göreme Open Air Museum ; It is a rock settlement place located 1 km east of the town of Goreme.
Monastery life maintained densely from the A.D 4Tth century until the 13th century. Almost all rock
blocks have ruins ofchurches, chapels, dining halls and living rooms. Today’s Goreme is considered
the place where Open Air Museum monastery education system got started. The churches were
painted with 2 types of technique. The first one is to paint directly over the surface of the rock after it
was polished; the second one is to paint the surface of the rock with secco(tempera) and fresco
technique. The crafts carved in the churches were choosen from the Bible and from Jesus Christ’s life.
There are many churches inside and around the Göreme Open Air Museum. The most commonly
known structures are Tokalı Church, Saint Eusthatios Church, Saint Daniel Chapel, Madonna(Virgin
Mary) Church, Kılıçlar Church, El Nazar Church, Aynalı Church, Rahibeler(Sisters) Monastery, Saint
Basileos Chapel, Elmalı Church, Saint Barbara Chapel, Yılanlı Church, Karanlık(Dark) Church, Saint
Catherine Chapel and Çarıklı Church.
Sisters Monastery ; it is also known as Kızlar(Girls) Monastery or church. It was carved as six storeys
in to a high rock block just opposite of museum entrance gate. There are food court, rooms, a ruined
small chapel, and a church inside of it. Today, only the food court at the entrance storey, kitchen and
some rooms can be visited. There is a small chapel at the second storey, and a church which is
indicated to be built in the year of 1055.
Saint Basileos Chapel ; The chapel was constructed with three apsises and has a rectangular plan.
The columns inside the chapel divide it into two sections. In shorter side there are grave holes on the
floor. There are also paintings inside the chapel in accordance to a certain order. Inside this 11th
century structure you can see child Jesus and Mary on the apsis; on the left wall Saint Demetrius and

Saint George on horse and two other saints while they fight against a dragon; and on the right wall
Saint Theodora on horse was figured.
Saint Barbara Chapel ; Inside the chapel, there is a fresco of Saint Barbara who was killed by her
father as she resisted reverting from her beliefs. The building was constructed as a form of Greek
cross with three apsises, and seated on two columns. It seems the red ornaments and paintings on
the wall of the chapel are daub, as if they were made by apprentices while masters’ absence. There
are figures of Jesus Pantocrator on main apsis, Saint Georgios and Theodora on the northern cross
arm, and Saint Barbara on the West arm cross.
Saint Catherine Chapel ; it is a form of grace chapel, and set in two sections. There are nine grave
holes on the base of the entrance section. The chapel accessed by here was constructed in
accordance to floating cross plan with the single apsis in 11th century. Among visible scenes, there
are Deesis on the apsis, medallions and saint descriptions on the walls under the apsis and Saints
Theodora and Catherine on the right Wall of the entrance.
Saint Eusthatios Church ; it is possible to reach the church through a footpath separated from a
Tokalı Church. The entrance of the church is 4 m high from the base. The entrance is come up by a
stairway. It has a rectangular plan and single apsis. There is an altar on the middle of the apsis. The
church was enlarged by adding a grave chapel. There are graves in this section. The church was
enlarged by adding a grave chapel. There are graves in this section. The church was built in 1148 that
is understood by scraped date on the Wall. Red and green colors are dominant in the frescoes. There
is a figure of Saint Eusthatios on the right side of the apsis wall.
Saint Daniel Chapel ; it is very close to the Saint Eusthatios Church. Its door is closed with an iron-
grid fence. The structure is a grave chapel with rectangular plan and singular apsis. It is called as Saint
Daniel based on the figure of Saint Daniel among lions, and figures of Daniel with Jesus. The date of
frescoes is 11th century. Some of the drawings are said to belong the icon-breaking Iconoclasm
period.
Saint Hieron Chapel ; the grav chapl constructed in the honor of Saint Hieron, is located on the left
side of the road passes from Goreme to Uchisar. Saint Hieron was one of the soldier saints. Like the
other soldier saints, Hieron has been named as Saint after his being martyrdom. Saint Hieron is not
one of the well known saints of Christian world. He appears as a local Saint.