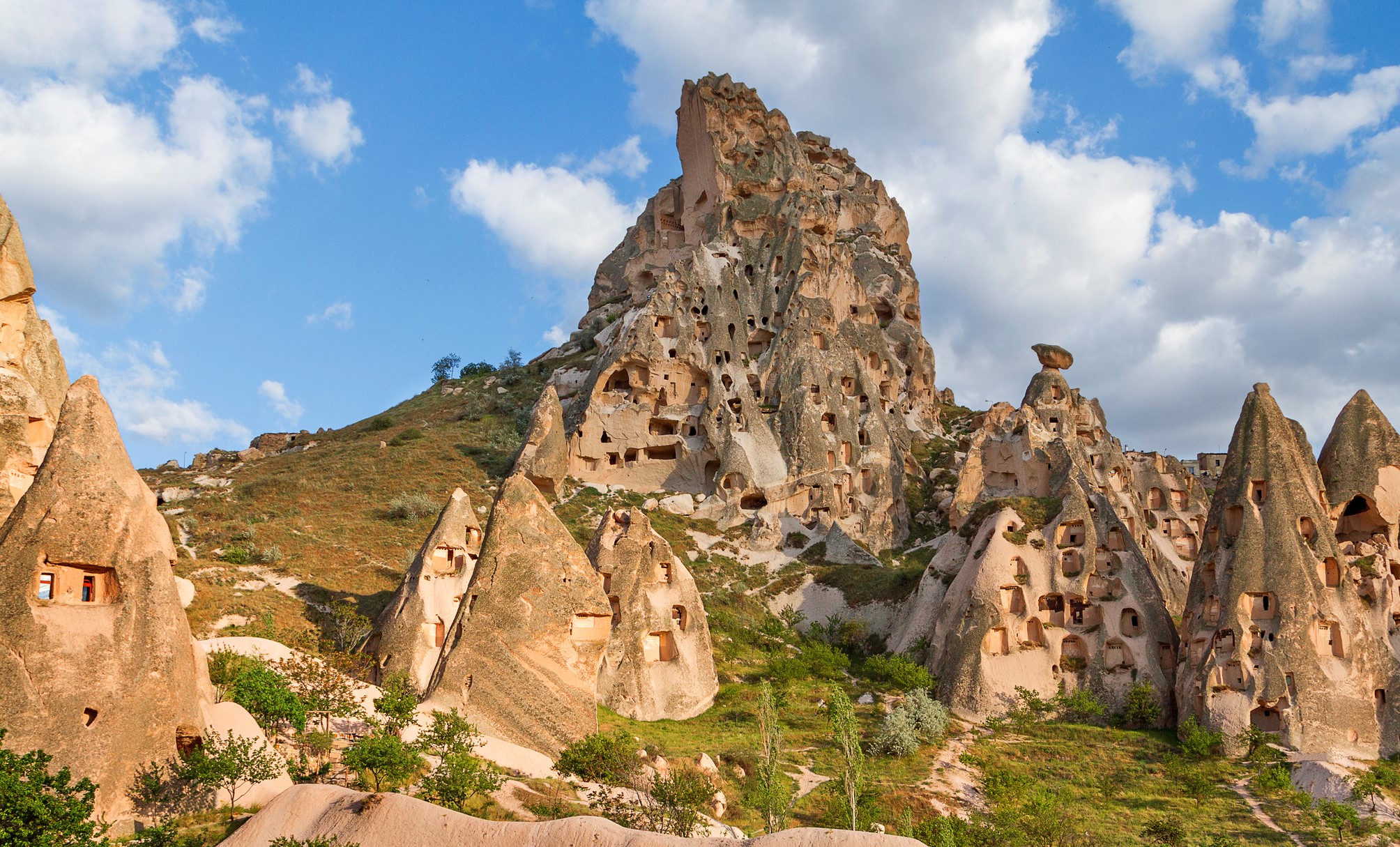 After breakfast depart from Hotel for full day walking tour of Old City ;
Hagia Sophia, once described as the greatest church in Christendom, is certainly a masterpiece with a synthesis of the Occident and the Orient. Built by Constantine the Great in 325 on the remains of a pagan temple. Rebuilt by Justinian and Theodora. In 1453, Mehmet the Conqueror added minarets to the huge, soaring dome and turned the former church into a mosque. The building controversially became a museum in 1935, but the interior retains its religious associations with the Christian mosaics and Muslim calligraphic disks adorning its walls and piers.
Blue Mosque has a special place among the various Ottoman buildings constructed in the Sultanahmet  Square. Constructed by Sedefkar Mehmet Aga who took classical Ottoman architecture and the Hagia Sophia into consideration in designing and construction of the Blue Mosque and created an interior space which is more spacious, well lighted and airy than the others. It is known as the Blue Mosque for the blue tiles adorning the walls of its interior.
Hippodrome, a public park used in the days of the Byzantine Empire for ceremonies and sporting events(chariot races, athletics). Theodosius Obelisk, Serpentine Column, Column of Constantine and German Fountain of Wilhelm II are the monuments decorating Hippodrome.
Grand Bazaar, is the oldest and biggest closed bazaar of the world. It was founded in 1461. Like an enormous labyrinth, it is a spectacular and unique part of Istanbul with 60 streets and over 3600 stores. The Grand Bazaar offers a wide range of products from copper to glazed tiles, from marriage articles to ready wear, and from various handicrafts to all types of spice.  Western writers often mention the Grand Bazaar in their memories and travel journals.
Topkapı Palace which had been the seat of government for the Ottoman Empire that ruled three continents for centuries, was constructed between the years of 1460 and 1478 during the reign of Sultan Mehmed II(The Conqueror). It was home to the sultans and their families until the reign of Sultan Abdülmecit. Therefore, it has a very rich collection of porcelains, robes, weapons, shields, armors, miniatures, Islamic calligraphic manuscripts as well as Ottoman treasures and jewellery.
Tombs of the Sultans at Hagia Sophia , five sultans Mehmed III, Selim II, Murad III, Ibrahim I and Mustafa I rest in eternal splendor, teeming with overlooked beauty and drama.
End of tour transfer to Hotel. Overnight in Istanbul.

After breakfast depart from Hotel for Half Day Bosphorus Cruise Tour ;
City Walls , the old Istanbul peninsula is surrounded by the old walls like a triangle. The walls, with a lenght of around 22 km, date back to the 5th century during the Roman era.
To Golden Horn by bus , approximately 8 km long, narrow horn shape divides the European shore into two. Since it is a natural port, Byzantine and Ottoman Navies and those interested in commercial shipping gathered there. At sunset the water’s colour turns into gold and today the shores are surrounded by pleasant parks and walking paths.
Spice Bazaar(Egyptian Bazaar), the second biggest closed bazaar of Istanbul. It was named Valide Bazaar when it was first founded but it was named the Mısır Çarşısı(The Egyptian Bazaar), due to the many types od spice sold there, it is known as the Spice Bazaar by foreign tourists. Beside spices and natural herbs, describing Spice Market, it is always possible to find various kinds of fresh dried fruit.
Boat trip on the Bosphorus, an amazing cruise between the two continents, Europe and Asia. The Bosphorus that connects  Black Sea with Marmara Sea and seperates Asia and Europe, is the apple of the World with its unique natural beauty. The Asian and European shores of the Bosphorus are embellished with beautiful waterside residences.
The Rumeli Fortress(from the sea, no interior visit), was built in 1452 in order to prevent aid and reinforcement from the Black Sea during the siege of Istanbul. It was restored and turned into a museum in 1950’s. Hisariçi(Inside the fortress) is often used as an open air theatre.
End of tour transfer to Hotel. Overnight in Istanbul.

Pick up from Hotel early in the morning and transfer to Airport. Flight to Cappadocia. After arriving transfer to our branch office. Pick up from office for full day North Cappadocia Tour;
Goreme Panorama, a stop to take nice pictures of Goreme town at a spectacular viewpoint.
Goreme Open Air Museum, almost all rock blocks have ruins of churches, chapels, dining halls and living rooms. Today’s Goreme is considered the place where Open Air Museum monastery education system got started.
Avanos, its name in the period was Venessa. The tradition of making ceramics in the district dates back to Hittites. The ceramic mud made from red soils and loam brought by Kızılırmak(Red River) is shaped in the hands of the ceramic artists of Avanos.
Devrent Valley, also known as valley of Fairy Chimneys. Not very large valley , with small tuff cones standing close to each other by the hundreds and making the horizon look ragged.
Pasabagi(Monks Valley), the region used to be called Priests Valley is decorated with very interesting natural formations. Conical shapes of single bodies with several heads scattered in vineyards make the area a nice walking place. Was used for seclusion by priests aimed to live a reclusive life.
Urgup’s Fairy Chimneys, with conical shaped body and a boulder on top of it. Three Graces(Üç Güzeller) are the brilliant three fairy chimneys.
End of tour transfer to Hotel. Overnight in Cappadocia.

After breakfast pick up from Hotel for full day South Cappadocia Tour ;
Uchisar, famous with Uchisar Castle which was constructed on the highest point of the region, has been used as an important defense point against invasions during Roman and Byzantine periods.
Kızılçukur; it is a valley called Rose Valley as well because of the colour of the rocks. One of the nice valley for hiking in the area. That was also used by the Christians at the end of the 5th century.If you can look from a distance up on a hill, you can notice that the valley has a shape like a finge. So wherever you start hiking you come out from same point. The valley colour also change up to daylights tha is why one of the best place to watch the sunset.
Cavusin, church and castle of Cavusin that was named after Emperor Nicephorus Phocas dates back to the years of 964-965. Church has single nave and it has a cradle vault and 3 apses. And its narthex is demolished.
Love Valley, offers you a wonderful view with its pillar shaped rock formations and funny shaped fairy chimneys. It is called originally White Valley that gives you chance to take amazing pictures.
Underground City(Kaymaklı or Ozkonak), in Cappadocia there are numerous historical underground cities, which were largely used by early Christians as hiding places.
Pigeon Valley, pigeons live in these dovecotes carved into the rocks and cliffs. Years ago the pigeons were used to carry messages from this remote region. Another great place for hiking.
End of tour transfer to bus station. Overnight bus to Pamukkale(it takes 9 hours).

Arrive Pamukkale bus station. Transfer to Hotel. Time to rest for a while and breakfast at the hotel. Pick up from Hotel and continue to;
Pamukkale, is a unique, magical wonder of the nature with its dazzling white and stoned castles. The thermal waters with limestone and salt, pouring by the bank of the plateau form up these marvelous stalacites, waterfalls and pools. These healing warm waters have been used for therapy since the Roman time. Visitors are allowed to walk in the cascading pools, that leads to squashing and dispersing the soft jelly of calcium carbonate.
Hierapolis, is on the same plateau with the thermal pools. provides visitors with a glimpse of the natural gifts of the region and cultural riches that man added to nature. The ancient city, situated 20 kilometres North of Denizli, is justly famous for the buildings and artefacts unearthed during extensive excavations. Hierapolis is known as the ‘Sacred City’ on account of its many temples and religious buildings. The geographers of antiquity, Strabo and Ptolemy, claimed that Hierapolis was a Phrygian city, because of its proximity to Laodicea on the Lycus and Tripolis, cities situated on the border with the Caria region.
Red Water Springs, at the North of Pamukkale in Karahayit Village. Due to having much higher content , the water appear red. The water also much hotter than Pamukkale water. You can enjoy seeing the water comes from the travertines in red color.
End of tour transfer to bus. Bus to Ephesus(takes 3 hours). After arriving check in to Hotel and overnight in Kusadasi.

After breakfast pick up from Hotel for full day Ephesus Tour ;
Ephesus Ancient City , an outstanding example of a Roman port city, with sea channel  and harbour basin. It was Hellenic Greece capital city and was the capital of the Roman Empire’s province of Asia. Ephesus was economically, geographically, politically and culturally significant. Many famous classical philosophers  who are still read today such as Heraclitus, lived in the scientific, cultural and artistic city of Ephesus.
After enter  through the Magnesia Gate and begin a slow  downhill walk with your guide . Your route takes you to the Odeon(Concert Hall), The Baths of Varius(used as a Gymnasium), Prytaneion(administrative offices also where religious ceremonies, official receptions and banquets were held), Agora(commercial market of Ephesus), The Temple of Hadrian(dedicated to Emperor Hadrian, Artemis and the people of Ephesus), The Fountain of Trajan(constructed for the honor of Emperor Trajan) and the Great Theatre. The theatre had seating for 24.000 which was the site where it is believed St. Paul preached to the Ephesians and is used today for a local spring festival.
Celsus Library, the most distinctive building and one of the most photographed structure that is commonly associated with Ephesus. It was erected by Gaius Julius Aquila(son of Tiberius Julius Celsus Polemaeanus). Assumed that the constrcution was completed in 117 A.D. It is made of very good marble and decorated with figures of Eros, Nike, rosettes and garlands in relief.
Hose of Virgin Mary, is close to the peak of Bülbül Mountain, one of the hills overlooking Selçuk. After the death of Jesus Christ, Virgin Mary had gone to Ephesus with Saint John and lived here since then on until her death at the age of 101.Thus this church is an important pilgrimage center for Christians. There is also a spring believed to be healing. The Popes Paul VI and Jean Paul II visited this house. The House of Virgin Mary is declared to be sacred and an important pilgrimage spot visited by Christians from all over the world.
The Temple of Artemis, was in its day the largest in the world, eclipsing even the Parthenon at Athens, and thus earning a spot on the list of the Seven Wonders of the Ancient World. Only one of its original 127 columns remains, often as not topped by a stork’s nest; a poignant testament to the transitory nature of human achievement. Still  it is a lovely tranquil place, the enormous pillar giving you some indication of the vast size of temple.
Isa Bey Mosque, with the order of Aydinogullari Emirate Isa Bey, was built in 1375. It is a nice sample of Seljuk Turkish architecture. It is on the western side of Ayasuluk Hill on which stand the fortress and the church of Saint John.
End of tour transfer to airport. Flight to Istanbul. Arrive Istanbul Airport.